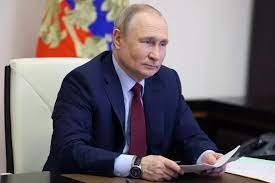 Russian President Vladimir Putin on Friday blamed the West for emerging global food and energy crises and repeated his government’s offers of safe passage for ships exporting grain from Ukraine if mines are removed from the waters.

Of course, we are now seeing attempts to shift the responsibility for what is happening on the world food market, the emerging problems in this market, onto Russia, he told Russian TV. I must say that this is an attempt, as our people say, to shift these problems from a sick to a healthy head.

As reported by the state-run Tass news agency, Putin also said Western sanctions against Russia would only worsen world markets reducing the harvest and driving up prices.

He said inflation stemmed from the unprecedented dollar printing press during the coronavirus pandemic and blamed short-sighted European policies for under-investment in alternatives to traditional energy supplies and price increases.

The Kremlin leader said Russia wasn’t blocking grain shipments from Ukraine and that the West is using Russia as a scapegoat for its problems.

Putin pledged that if the waters were demined, Russia wouldn’t attack grain shipments and suggested they could be made from the Ukrainian port of Berdyansk or other countries, such as Belarus. Berdyansk is under Russian occupation.

We won’t take advantage of the situation of demining to undertake any sea attacks,” Putin said.

These were Putin’s most extensive comments to date on the emerging food crisis.

Putin’s positions on these issues conflict with explanations given by Ukraine and its allies.