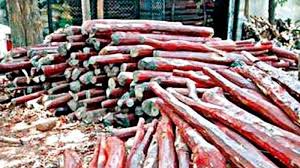 The arrests were made around 2 AM when the accused were on their way to Seshachalam forests here in a lorry from Tamil Nadu, Superintendent of Police, Red Sanders anti-smuggling Task Force, P Ravisankar told PTI.

“Two of those arrested were college students pursuing post graduation, he said adding axes, bags of rice, vegetables and cooking vessels were seized from them.

According to sources, a team that was keeping vigil on the movements of the woodcutters alerted about the lorry en route to Seshachalam hill ranges in Andhra Pradesh.

On receiving information, the task force teams rushed to Kadappa-Chennai highway, where the vehicle carrying the woodcutters was spotted and was intercepted at Anjaneyapuram near here.

Of the 84, half of them were from Vellore district while the rest belonged to Tiruvannamalai in Tamil Nadu, the SP said.

On February 28, a PIL was filed in the Madras High Court alleging that over 500 suspected woodcutters from Tamil Nadu had been “illegally detained” by the Andhra Pradesh police.

The PIL requested the court to take an appropriate action against “erring officials” of that state.

Advocate P Pugalenthi submitted that these persons had been “illegally detained” by police of that state without even the knowledge of the Tamil Nadu government.