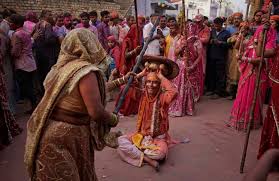 Holi is a festival of colours and is celebrated with full fervour not just in India but across Nepal and Pakistan as well. While smearing each other in vibrant colours form a huge part of the enjoyment, gorging on sumptuous snacks and drinking thandai laced with bhang is equally important. Another aspect that has unfortunately become a part of the festival is hooliganism and there has been a huge debate online about the same. Do a Google search and you will come across many stories of shameful incidents, especially in North India. Looks like the UP Police is in no mood to let away such crimes or offenders get away.

The UP cop isn’t the only one making sure that the law enforcement officials will not tolerate any wrongdoing just because it’s Holi. Urging people to celebrate the festival of colours responsibly, the Uttar Pradesh Police shared a small clip online to remind people Holi is supposed to be enjoyed by all and shouldn’t become a problem.