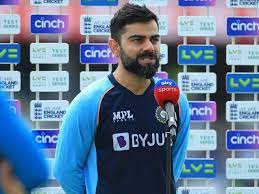 Virat Kohli said India’s middle-order collapse in the second innings was down to “scoreboard pressure” after England won by an innings and 76 runs.India suffered an early morning collapse on the fourth day of the third Test at Headingley in Leeds on Saturday as England sealed a comprehensive win by an innings and 76 runs to level the five-match series 1-1. Ollie Robinson was the pick of the English bowlers with figures of 5/65 while Craig Overton bagged three wickets. Having resumed the day at 215/2, India lost their remaining eight wickets for just 63 additional runs as the hosts cruised to a comfortable win. India had been bowled out for 78 in their first innings, with England posting 432 in response.

Speaking in the post-match presentation ceremony, India captain Virat Kohli said the middle-order collapse on Saturday morning was down to “scoreboard pressure” and praised the England bowlers for their performance.

“(It’s) basically down to scoreboard pressure. Always up against it when you get out for under 80 and the opposition puts up such a big score,” he said.

“But we did well to stay in the game yesterday, fight back as much as we could, and gave ourselves a chance. But the pressure today was outstanding from the England bowlers and eventually they got the results they wanted,” Kohli added.

The 32-year-old skipper defended his lower middle-order after a meek performance in Leeds.

“The top order has to give enough runs for the lower middle-order to step up. We did pretty well in the first two games,” he said.

“When you have a result like this, you can’t take too much from it. As a batting group we need to stay close and confident; even after 36 all out (against Australia in Adelaide), we came back.”

Asked about the first innings collapse which came after India won the toss and opted to bat, Kohli replied: “Quite bizarre, it can happen in this country, batting collapses. We thought the pitch was good to bat on, coming on nicely.

“But the discipline forced mistakes and the pressure was relentless. Difficult to cope when you’re not scoring runs. That caused the batting order to crumble.”

Kohli also added that India might continue to persist with four pacers in the fourth Test at The Oval.

“I think this template works, the four seamers. For sure, we set the template; you’re playing Test cricket and we’ve bounced back in the past,” he said.