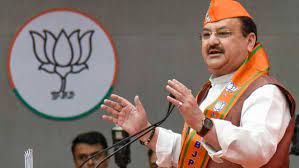 BJP President J P Nadda on Monday accused the opposition of waging a “direct onslaught on the spirit of our nation and casting aspersions on our hardworking citizens”, in a reaction to the rival parties’ joint statement attacking the Modi government over incidents of hate speech and communal violence.

In a letter to fellow Indians, Nadda said the opposition parties “tried, tested, or I should say dusted and rusted approach of vote bank politics, divisive politics, and selective politics is no longer working” as Prime Minister Narendra Modi’s emphasis on ‘Sabka Saath, Sabka Vikas, Sabka Vishwas and Sabka Prayas’ has seen Indians being empowered and getting the wings to rise further.

Unfortunately, this thrust towards development politics is being bitterly resisted by the rejected and dejected parties which are once again taking refuge in vote bank and divisive politics, he said.

“Today, India is seeing two distinctive styles of politics – the NDA’s efforts which are seen in their work and the petty politics of a group of parties, which is seen in their acerbic words,” he said.

“In the last few days, we have seen these parties come together yet again in letter (whether in spirit too, time will tell) in which they have waged a direct onslaught on the spirit of our nation and cast aspersions on our hardworking citizens,” the BJP president said.

The youth of India want opportunities not obstacles, they want development not divisions, he said, adding people across all faiths, age groups and different walks of life have come together to defeat poverty and take India to new heights of progress.

“I would urge the opposition to change track and embrace the politics of development. We owe this to our coming generations,” he said.

The results of the recently held assembly elections, in which the BJP won power in four of the five states, should be an eye opener for those who thrive on vote bank politics, he said.

India’s largest state on the electoral map (Uttar Pradesh), a coastal state (Goa), a state in the Northeast (Manipur) and a hill state (Uttarakhand) have given a resounding mandate to the BJP, he said, asserting India is seeing a pro-incumbency sentiment where developmental politics is being resoundingly rewarded.

The BJP also became the first party in many years to cross the 100 figure in the Rajya Sabha and got an absolute majority in the Uttar Pradesh legislative council, he added.

“The opposition should introspect why the parties that ruled the nation for so many decades have been confined to the margins of history now,” Nadda said.

In his context, he noted the communal violence during a religious procession in Karauli in the Congress-ruled Rajasthan and took a swipe at opposition parties, asking what are the compulsions driving their haunting silence on the issue.

He also referred to a number of riots when the opposition, mostly the Congress, was in power and various incidents in opposition-ruled states like Tamil Nadu and Maharashtra besides political violence in West Bengal and Kerala to hit out at them.

He referred to the firing on ‘sadhus’ demanding ban on cow slaughter in a protest outside Parliament in 1966 when Indira Gandhi was prime minister, Rajiv Gandhi’s justification of anti-Sikh pogrom with “when a big tree falls, the earth shakes” remarks and communal riots in Gujarat in 1969, Moradabad in 1980, Bhiwandi in 1984 and Bhagalpur in 1989 among others to target the opposition.

“Let me remind everyone that it was the UPA, controlled by an extra constitutional NAC (National Advisory Council) that brought in the most horrific Communal Violence Bill, which stooped to new lows of vote bank politics by even UPA standards. Similarly, the most horrific massacres against Dalits and tribals have taken place under Congress regimes,” Nadda said.

Leaders of 13 Opposition parties on Saturday voiced deep concern over recent incidents of hate speech and communal violence in the country, and urged people to maintain peace and harmony.

In a joint statement, the leaders including Congress president Sonia Gandhi, NCP chief Sharad Pawar, West Bengal Chief Minister Mamata Banerjee, and her Tamil Nadu and Jharkhand counterparts M K Stalin and Hemant Soren, also raised concern over the manner in which issues relating to food, dress, faith, festivals and language “are being deliberately used by the ruling establishment to polarise society”.

In his rejoinder, Nadda questioned the conduct of many of these parties by citing incidents in states where they are in power.

In Tamil Nadu, elements aligned to the ruling party in the state have left no stone unturned in smearing and humiliating one of India’s tallest musical maestros just because his views are not palatable to one political party and their allies, he said in an apparent reference to legendary composer Ilaiyaraaja, whose comparison of Modi with B R Ambedkar had drawn criticism from some quarters.

“Is this democratic? One can have different views and yet coexist happily but why take to insults,” he asked.

Referring to the arrest of Maharashtra Cabinet ministers by central agencies on alleged charges of corruption and extortion and links with criminals, Nadda asked if it is not worrisome that a state home to India’s financial capital has such an uninspiring coalition where top ministers have such “extortionist” tendencies.

“The reason for the shameful conduct by a select group of political parties lies in the above list of incidents that I have shared. Dyed in the wool proponents of vote bank politics that they are, these parties are fearing that their shenanigans are being finally exposed comprehensively,” he said.

He said India’s growth trajectory is at a critical juncture, its economy is seen as “open and transparent”, with the recent reforms having increased “economic prosperity” and poverty being alleviated at a quicker pace. This is an occasion to think ahead and plan for how the nation must be when it mark a hundred years of independence in 2047, he said.