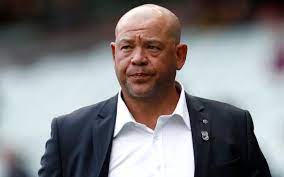 Former Australia cricketer Andrew Symonds, one of the finest all-rounders and a two-time World Cup winner, has died in a tragic car accident, leaving the cricketing world in shock.

He was 46 and is survived by his wife and two young children.

Cricket Australia has now lost three prominent figures in the past two months. Spin legend Shane Warne and former wicketkeeper Rodney Marsh had died within hours of each other in March.

According to a statement issued by Queensland police, the accident happened in Hervey Range Road, about 50 km outside Townsville in northeast Australia on Saturday night.

“Police are investigating a single-vehicle crash in Hervey Range, around 50 kilometres from Townsville that’s taken the life of a 46-year-old man last night,” the statement said.

“Early information indicates, shortly after 11pm the car was being driven on Hervey Range Road, near Alice River Bridge when it left the roadway and rolled.

“Emergency services attempted to revive the 46-year-old driver and sole occupant, however, he died of his injuries.”

An attacking batter, who could also bowl both medium pace and spin and an outstanding fielder, Symonds featured in 26 Tests, 198 ODIs and 14 T20Is in a successful career between 1998 and 2009.

“Andrew was a generational talent who was instrumental in Australia’s success at World Cups and as part of Queensland’s rich cricket history.

“He was a cult figure to many who was treasured by his fans and friends. On behalf of Australian cricket our deepest sympathies are with Andrew’s family, team-mates, and friends,” he added.

One of his greatest moment on the cricketing field came when he blasted 143 off 125 balls after coming on to bat with Australia at 86 for four against Pakistan in the opening ODI of the 2003 World Cup.

Symonds scored 5088 runs, including six hundreds, in his ODI career since making debut in 1998. He also featured in 14 T20Is and averaged 48.14, besides playing in the IPL for now-defunct Deccan Chargers and Mumbai Indians in the final stages of his career.

Playing for the Chargers, he had slammed a 53-ball 117 not out against Rajasthan Royals in the inaugural edition.

He also hit 1462 runs with two hundreds and 10 fifties after being picked for the Tests in 2004 against Sri Lanka.

The Sydney Test, however, went on to become the most controversial moment of his career due to the ‘Monkey Gate’ scandal involving India spinner Harbhajan Singh.

Symonds, lovingly known as ‘Roy’, also had his share of controversies.

He was axed from the two ODIs during Australia’s tour of England in 2005 after he turned up drunk for a match against Bangladesh.

Three years later, Symonds missed a team meeting after going for fishing in Darwin and was sent back home.

Another disciplinary issue saw him being axed from Australia’s squad in England on the eve of the 2009 T20 World Cup, which ended his career with Cricket Australia cancelling his contract soon after.

The off-field issues aside, Symonds will be remembered for his on-field exploits which also included a 34-ball hundred for Kent in 2004.

He also held the record for joint-most number of sixes in a County Championship innings when he hit 16 maximums for Gloucestershire against Glamorgan in 1995. It stood for 27 years before being broken by England’s Ben Stokes last month.

He retired from all forms of cricket in 2012 and became a regular in the commentary box during Australia’s home season as well as in the Big Bash League.

“It is a shattering loss to those nearest to him, and his wide circle of friends which extend to all corners of the cricketing world.

“His untimely passing will also resonate deeply with the many fans who thrilled to his efforts with bat, ball and in the field. He stood out for his skill, courage and determination, and the fans who saw him at his best will never forget his impact on a game.”

“We are all hurting and will miss him greatly. His former teammates will remember his loyalty to the playing group and recall the fun times with great fondness, and sorrow that he is gone.