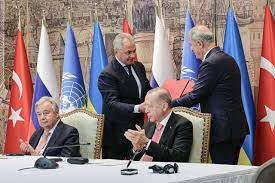 Ukrainian President Volodymyr Zelenskyy is due to host the UN chief and Turkey’s leader Thursday for talks on the recent deal to resume Ukraine’s grain exports, the volatile situation at a Russian-occupied nuclear power plant and efforts to help end the nearly six-month-old war.

UN deputy spokesman Farhan Haq said that among other issues, Guterres will discuss “his overall efforts to do what he can to essentially lower the temperature as much as possible with the various authorities.

Last month, Turkey and the UN helped broker an agreement clearing the way for Ukraine to export 22 million tons of corn and other grain stuck in its Black Sea ports since Russia invaded February 24.

A separate memorandum between Russia and the UN aimed to clear roadblocks to shipments of Russian food and fertilizer to world markets.

The war and the blocked exports significantly exacerbated the global food crisis because Ukraine and Russia are major suppliers.

Grain prices peaked after Russia’s invasion, and while some have since returned to prewar levels, they remain significantly higher than before the COVID-19 pandemic.

Developing countries have been hit particularly hard by supply shortages and high prices. Even though ships are now leaving Russia and Ukraine, the food crisis hasn’t ended.

UN spokesman Stephane Dujarric told reporters this week that Guterres’ trip to Ukraine will allow him to see first-hand the results of an initiative that is so critically important to hundreds of millions of people.

Dujarric added that he expects the need for a political solution to the war to be raised in Thursday’s talks.

He said the three leaders will also discuss the situation at the Russian-controlled Zaporizhzhia nuclear power plant in southern Ukraine, Europe’s largest, which Moscow and Kyiv have accused each other of shelling.

In his nightly video address Wednesday, Zelensky reaffirmed his demand for the Russian military to leave the plant, emphasizing that only absolute transparency and control of the situation at and around the Zaporizhzhia nuclear power plant for the Ukrainian state, for the international community, and for the IAEA can guarantee a gradual return to normal nuclear safety. The International Atomic Energy Agency is a UN agency.

Russia has rejected the demand.

Erdogan’s office has confirmed that he would discuss the grain deal during the talks as well as ways to end the war through diplomatic means.

Earlier this month, the Turkish leader met on the same issues with Russian President Vladimir Putin.

In March, Turkey hosted a round of talks between Russian and Ukrainian negotiators, who discussed a possible deal to end the hostilities. The talks fell apart after the meeting in Istanbul, with both sides blaming each other.

Erdogan has engaged in a delicate balancing act, maintaining good relations with both Russia and Ukraine. Turkey has provided Ukraine with drones, which played a significant role in deterring a Russian advance early in the conflict, but it has refrained from joining Western sanctions against Russia over the war.

During their meeting in Sochi this month, Putin and Erdogan agreed to bolster energy, financial and other ties between their countries, raising concerns in the West that Ankara could help Moscow bypass the US and European Union sanctions.