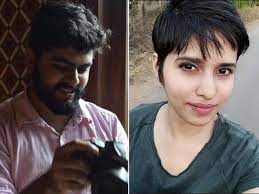 The two were colleagues in Mumbai and started dating. After her family did not approve of their relationship, the couple eloped to Delhi and started living in a flat in Mehrauli.

In a shocking case, a man allegedly strangled his live-in partner, chopped her body into 35 pieces, and dumped them in Delhi’s Mehrauli forest over 18 days, say police sources. He got away with the murder for five to six months.

He would step out at 2 am every day to dump the body parts, sources say.

The accused has been sent to five days in police custody.

Aftab Ameen Poonawala, 28, allegedly strangled his live-in partner Shraddha Walkar on May 18 after they had a fight. He then chopped her body into 35 pieces and bought a 300-litre fridge to keep them, sources say. Over the next 18 days, he disposed of the pieces at different areas of the Mehrauli forest, they added.

“The duo fell in love while working in Mumbai and came to Delhi by April-end or May first week after facing opposition from their families. While they were living in the national capital, they had an argument in mid-May over marriage, which escalated, and he strangled her,” Ankit Chauhan, Additional DCP-I, South district, said.

“The accused had preserved the woman’s body in a fridge and disposed them on different occasions,” he added.

26-year-old Shraddha worked at the call centre for a multinational company in Mumbai, where she met Poonawala. The two started dating and moved in together. After her family did not approve of their relationship, the couple eloped and came to Delhi. They started living in a flat in Mehrauli.

In September, Shraddha’s friend informed her brother that her mobile phone had been switched off for over two months. Her family also checked her social media accounts and found no updates during this period.

During the initial investigation, the victim’s last location was found in Delhi, and on the basis of this, the case was transferred to Delhi police.

On November 8, Vikas Madaan Walkar came to Delhi to check on his daughter and found a lock on her flat. He approached the Mehrauli Police and filed a complaint alleging kidnapping.

In his complaint, Mr Walkar alleged that Shraddha had earlier told him that Poonawala used to frequently beat her.

On the basis of this, police arrested Poonawala on Saturday. During investigation, he revealed that the two fought frequently as Shraddha wanted to marry him, police sources said. He also confessed to the police how he killed her and disposed off the body.

The police have filed a case of murder against Poonawala.

Police said some remains were recovered from the forest, but it is not known if they are human remains. The knife used by the accused, who was reportedly trained as a chef, has also not been found yet, they said.”In a heart-wrenching case, a girl was killed by her boyfriend in Delhi and kept in the fridge in 35 pieces! The pieces of her dead body were thrown in different areas of the city. What kind of monsters are living in society? The police have arrested the accused, he should be punished severely,” Delhi Commission for Women chief Swati Maliwal said in a tweet.