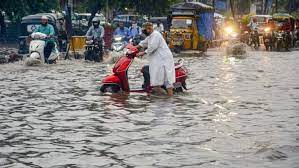 Five people were rescued from a flood-hit village in Madhya Pradesh’s Shivpuri district on Tuesday morning while efforts were on to save three others stranded on a tree following heavy rains in the area since the last two days, officials said.

On Monday, defence aircraft were pressed into service to evacuate people from some flood-affected villages in Shivpuri.

However, because of the heavy rains and bad weather in the district on Tuesday, the aircraft are unable to fly for the rescue operations, the officials said.

Chief Minister Shivraj Singh Chouhan was in constant touch with the administrations of rain-affected Shivpuri, Sheopur, Bhind and Datia districts and keeping a watch on the situation, they said.

“Five people were rescued this morning from Piproudha village in Shivpuri, while efforts are on to save three others stranded on a tree in a flooded area nearby,” the official from the state administration said.

The chief minister has also called an emergency meeting at the secretariat in the state capital Bhopal to monitor the rescue operation and to review the flood situation in Gwalior and Chambal divisions, the official said.

In Sheopur, nearly 60 people, who were stranded in a flooded building located near the Vijaypur bus stand following heavy rains, were rescued on Monday. They had gone to Vijaypur to attend a marriage on Sunday night, but got stuck as flood waters entered the premises, officials said.