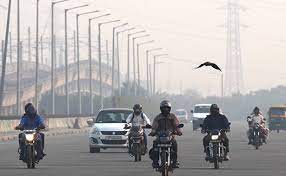 The minister’s charges came on a day when smoke from farm fires contributed to up to 32 per cent of the tiny PM 2.5 lung-damaging pollutants in the city’s air – the highest in the past two years.

Delhi Chief Minister Arvind Kejriwal’s efforts at cornering Prime Minister Narendra Modi over shocking levels of air pollution in the capital and rest of north India earned him a sharp rebuke from the Union Environment Minister on Wednesday.

In a scathing attack on Mr Kejriwal’s Aam Aadmi Party (AAP), Union Minister Bhupender Yadav blamed the party for turning the capital into a “gas chamber” and accused it of a “scam”.

“As of today, Punjab, a state run by the AAP government, has seen an over 19% rise in farm fires over 2021. Haryana has seen a 30.6% drop. Just today, Punjab saw 3,634 fires. There is no doubt over who has turned Delhi into a gas chamber,” Mr Yadav tweeted.

“Scam is where AAP is. In the last 5 years, the Central Government gave ₹ 1,347 crore for crop residue management machines to Punjab. The state bought 1,20,000 machines. 11,275 of those machines have gone missing. Money utilisation shows clear incompetence,” he alleged.

“Last year, ₹ 212 crore were left unspent. This year, the Central Govt gave Punjab ₹ 280 crore for crop residue management machines. So about ₹ 492 crore was available but the state govt chose to sit with the funds forcing helpless farmers to burn the crop residue,” the minister wrote.

“The Chief Minister of Punjab has failed to even provide relief to farmers in his own turf of Sangrur. Last year (Sept 15-Nov 2) farm fires in Sangrur stood at 1,266. This year they have shot up by 139% rising to 3,025,” Mr Yadav said, targeting Punjab Chief Minister Bhagwant Mann.

The minister’s charges followed Delhi Chief Minister Arvind Kejriwal’s questions to PM Modi over the issue.”Pollution is a problem of entire North India. UP, Haryana, Rajasthan, Madhya Pradesh. The Air Quality Index (AQI) is almost equal everywhere. Did Delhi-Punjab spread pollution all over the country? Why is the PM not calling a meeting of all states on this?” he told reporters.

“The centre is not helping the farmers, only filing FIRs against them. They rejected our proposal on tackling stubble burning. There is only politics going on about this, no one is talking about the solution,” Mr Kejriwal added.

The exchange came on a day when smoke from farm fires contributed to up to 32 per cent of the tiny PM 2.5 lung-damaging pollutants in the city’s air – the highest in the past two years during the period of mid-October to early November, according to data from the Ministry of Earth Science.

PM 2.5 are fine particles that are 2.5 microns or less in diameter and can travel deep into the respiratory tract, reaching the lungs and entering the bloodstream.The Commission for Air Quality Management had last week said the increased incidents of stubble burning in Punjab this year “is a matter of serious concern”. Along with unfavourable meteorological conditions, paddy straw burning in adjoining states is a major reason behind the alarming spike in air pollution levels in the national capital in October and November.Farmers set their fields on fire to quickly clear off the crop residue before cultivating wheat and vegetables.